Are You a Wimpy Writer?

What’s wrong with these sentences?

My manuscript was rejected.

If you recognize the problems in these sentences, pat yourself on the back.  If you don’t recognize the problems in these sentences, you may be afflicted with a debilitating prose malady that if not corrected, will leave you fit for only the most obscure and useless kinds of writing: political and academic.  If that’s the kind of writing you plan to do, stop reading now.  If you hope to write fiction and nonfiction that people might actually want to read, read on.

The world has need of all kinds of writers, so you shouldn’t feel ashamed if you’re doomed to write for political or academic stuff.  Someone needs to write vague, ambiguous, wordy sentences, and if that’s you, embrace your fate and prepare for a career as a weak-willed, mealy-mouthy, wimpy writer.

Not that there’s anything wrong with that.

But most writers prefer an audience of living, breathing readers, readers who have a wider view of the world.  And those writers, my friends, do not use the passive voice.  Real, living-breathing writers compose in active voice, that is, their sentences have subjects that are also the doers of the action of a sentence.  If you look at the sentences above, you’ll see that although they have subjects, the doer (or actor, or perpetrator) is obscured.  I love the political, sideways admission of guilt, “Mistakes were made,” because it’s absolutely true.  Mistakes were made, but it cleverly leaves out the committer of those mistakes.  A revision of that sentence into active voice would look like this:  “I made mistakes” or “My vice president made mistakes” or “The blasted cat made mistakes.”

The second sentence suffers from the same wimpy, brain-sucking disease.  Instead of writing, “People were hurt,” a living, breathing writer would say, “The blasted cat hurt people” or “The shipwreck hurt people” or something like that.  In the last example, rather than letting an editor off the hook with a passive construction of “My manuscript was rejected,” it should say something like “Throckmorten Jones, a bloodless editor at Mammoth Corporate Publishing, rejected my manuscript” or “The soulless, humorless Blogmistress at Throwing Up Words Inc. rejected my Project Writeway manuscript.”  As you can see, active sentences place the doer in the subject seat of the sentence and provide additional information that makes the sentence more direct and more specific.

If you need to brush up on your use of active voice, check out the passive voice link about and/or watch this video:

And then watch this video: 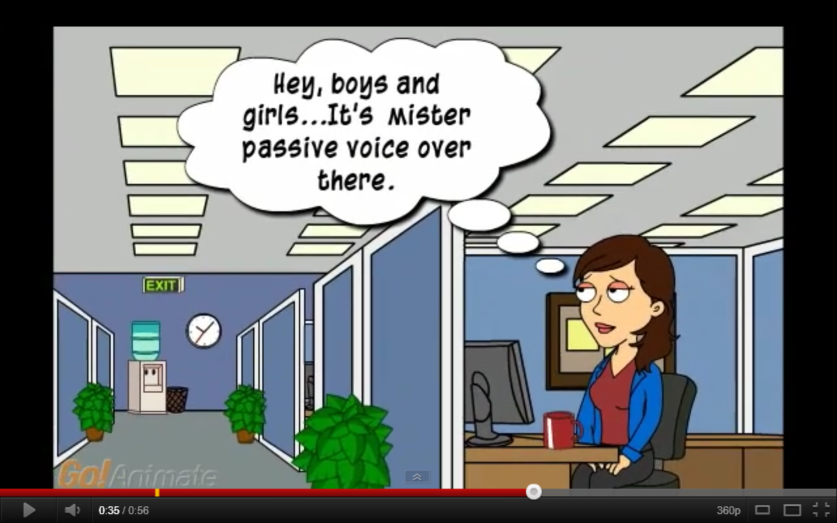 So, don’t be a wimpy, whiny, indecisive, weak-willed writer.  Use active voice.