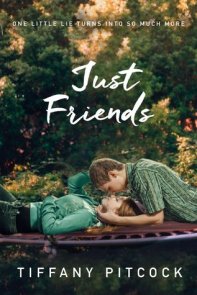 Tiffany Pitcock is a young writer from Benton, Ar. She studied English at Henderson State University, but has been writing stories for as long as she can remember. Besides reading, she is a fan of cats, staying indoors, and TV dramas.

You just had an awesome book come out called JUST FRIENDS. Can you tell us about it? How you came up with the idea?
Just Friends is about two teens – quiet, introverted Jenny (who learned everything from TV and movies) and charismatic but troubled Chance (who learned what NOT to do by watching his parents). They pretend to be friends to get through a school project, and everyone ends up believing it, so they decide to keep the charade going despite growing feelings for one another.

I came up with the idea after losing my first boyfriend/best friend in high school. I hid away in teen movies and started to wonder what it was about friends to lovers that people liked and the potential dangers of that kind of relationship. You can lose the friendship, but what if the friendship was fake to begin with? Just Friends grew from there.

What made you decide to start writing, and why did you choose children’s books?
I’ve been writing since I can remember. At least since third grade (I even promised my then best friend that I’d dedicate my first book to her, which I did!). The first book series that made me fall in love with reading was The Mediator by Meg Cabot in fifth grade, and ever since then I’ve wanted to write for teens too. YA books helped me all through adolescence, and I wanted to try to do my part to help others too.

Tell us about your experience getting into publishing. How long did it take you?
My journey into publishing was a lot different than others, I think. I’ve known what I wanted to do since I was eight. I finished my first manuscript when I was fourteen (it sucked) and wrote another one when I was sixteen (It really sucked!) and in my childhood naivety I tried (and failed) to acquire an agent with it. I didn’t write another thing until I was nineteen when I finished the first draft of Just Friends for a creative writing course. Swoon Reads – Macmillan’s crowd sourcing imprint – launched soon after and I submitted it on a whim and promptly forgot about it. A year later, they reached out to me, and the rest is history. So, in a way, it took my entire lifetime, but I also realize how lucky I am to have had such a stress-free time with it.

What writing advice do you have for someone trying to breakout in the market?
Write. Just write. It’ll be hard, and some days you’ll feel like lighting your manuscript on fire, but you have to keep going. Writers write, end of story.

When you’re not writing, what do you enjoy doing?
Eating. And painting, and binging tv, and going on walks.

What are you working on now?
A few things, mostly half started WiPs. Every time I start getting serious about something, a new idea shows up.